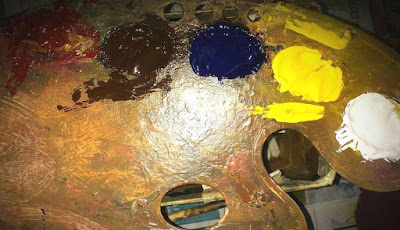 I accidentally stumbled across Mark Carder’s YouTube video channel DrawMixPaint in November 2015. At that time, I was heavily confused over my skills and felt that I reached the dead-end. It was like a boon for me to find http://www.drawmixpaint.com/; Mark’s instructions aimed at all the things that I was struggling with at that time.

Previously, I was under the influence of a group of artists who paint oil paintings like pastels with bright colors all around and have no connection with reality. I do not call these Impressionism because the real Impressionists painted the best pictures that are full of life and spirit. I was seeing and painting the natural colors but convinced myself (due to the influence of the aforementioned artists) that I was doing something wrong and against the trend. This conflict was beginning to destroy my own joy of painting. But after finding Mark, I understood that there was nothing wrong with my eyes and came across a large number of great artists worldwide who paint realism. They see natural colors and use the learning of both Impressionism and previous ages.

One of the most important factors that Mark Carder addressed was his use of ultra-limited color palette for natural colors instead of a big color palette. Before 2014, I used only the color that I felt I needed in a painting, which resulted in chaos. In 2014, I moved towards split primary colors (Titanium White, Cadmium Yellow Deep, Cadmium Lemon Yellow, Cadmium Red Light, Alizarin Crimson, Ultramarine and Prussian Blue). However, this also became difficult to maintain as acquiring all these colors became very expensive. Some of them were Series 4 and similar Hue colors were not that brilliant. So, I needed something new and stable.

Mark’s palette has only five colors: Titanium White (White); Cadmium Yellow/ Cadmium Yellow Light Pale (yellow); Pyrrol Rubine/Permanent Alizarin Crimson/Permanent Madder Deep in Rembrandt (red); Burnt Umber (Brown) and French Ultramarine (Blue). So, it minimized the cost beyond measure. It has two warm/cool lightening/darkening color and mixing can be done totally according to Mark’s simplified color mixing chart. Only addition to the primaries is Burnt Umber, which really is the workhorse of this palette. It saves other expensive colors, maintains warmth, prevents bluish milkiness and creates a dark orange base.

Mark justifies that any natural colors (except brightest oranges, purples and blue-greens) can be mixed and matched with this palette provided the painting is painted under the same brightness of light as the subject. Mark's color mixing chart below is very simple and self explanatory. This theory simplifies all sorts of confusion regarding mixing. E.g. if the color has become more blue-green compared to the subject, then add the opposite color brown to normalize it. If green is too yellowish as compared to the subject, then add purple to diffuse the yellow in the green. I used this theory and it works very beautifully. It has reduced all my previous efforts to the minimum. 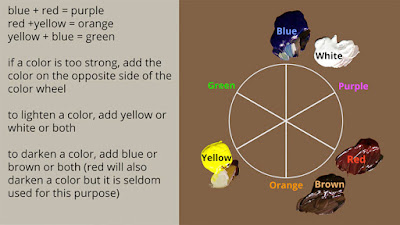 When you reach a point where you cannot match a color with this palette, you can use auxiliary powerful colors such as Pthalo Blue, Cadmium Scarlet/Orange and bright purples. In that way both cost and effort to manipulate these powerful colors will be minimum.

It is important to mention that Mark recommends mixing clove oil and stand oil to oil paints, which leaves the paint wet for a longer period which is again a trend breaker in the industry as the most manufacturers and artists opt for quicker drying time. They think that slow drying is a problem. It is easier to manipulate wet paint rather than painting wet-on-dry. This theory helped me again a great deal in improving my art. I used to wait for my paints to dry to correct mistakes; now I don't.

I hope this blog helps the reader to make his/her painting process smoother like wet paint 😀. Many people won't believe that such a limited palette is of any use. But I feel that it is better to try and then believe.
Posted by Kaustav Mukherjee at 11:47 PM 2 comments:

Kaustav Mukherjee is an Indian artist specializes in landscapes and portraiture.

Kaustav Mukherjee
Kaustav Mukherjee, is an award winning artist, started painting very early in his childhood and considered painting seriously since 1996 after an encounter with John Constable's grand romantic landscape 'The Hay Wain'. The artists considers this painting a seminal influence on his life. ​ Kaustav appeared as a professional artist in 2011. His passion for art enhanced with a constant drive to depict his vision as truthfully as possible. During his artistic journey he participated in exhibitions and workshops under Mr. R.N Batham's curatorship in Kala Mitra Gallery in Noida, Uttar Pradesh. Kaustav has clients throughout the world. As a professional artist who specializes in landscape, portraiture and still life paintings, Kaustav has the ability to communicate his intimate connection to the subjects. His portraits and still life paintings further explore the modernity of the everyday within the traditional framework of realist fine art oil painting.